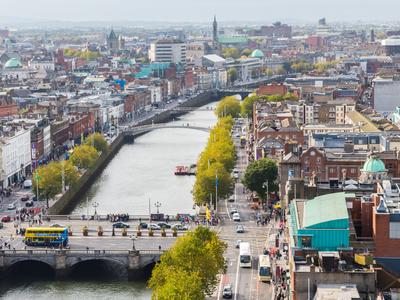 On board Aer Lingus flights, cabin baggage should not exceed 48x33x20cm. If your hand luggage is bigger, the Aer Lingus assistance team will most likely ask you to pay extra for checked luggage.

Where does Aer Lingus fly to?

Aer Lingus offers direct flights to 67 cities in 20 different countries. Dublin, London, and Málaga are the most popular cities covered by Aer Lingus.

What is Aer Lingus’ primary hub?

Aer Lingus concentrates most of its flight operations in Dublin.

How does KAYAK find such low prices on Aer Lingus flights?

KAYAK is a travel search engine, meaning that we continuously look across the web to find the best deals for our users. With over 2 billion flight queries processed yearly, we are able to display a variety of prices and options on flights from all airlines, including Aer Lingus.

Aer Lingus is a national airline of Ireland and operates out of its hub in Dublin. Flying extensively throughout the United Kingdom and Europe, popular vacation destinations such as France, Greece and Croatia make up a large portion of their seasonal routes. It has operated services across the Atlantic Ocean to New York since 1958 and has since expanded to offer more than 10 other American cities.

In 2015 it was bought by the International Airline Group and now exists as a subsidiary of the company alongside other European airlines Vueling, Iberia and British Airways. Codeshare agreements are in place with a number of other carriers including United Airlines, Etihad Airways, Air Canada, Alaska Airlines and WestJet. Despite having a limited number of scheduled flights through North America, Aer Lingus is able to offer a range of services via these codeshare agreements.

Preferring to use only Airbus planes, the Aer Lingus fleet is predominantly made up of short-to-medium range jets such as the A320 family. Boeing and British Aerospace aircraft have been phased out of the fleet. A distinctive green shamrock leaf is located on the tail of the aircraft. All flights within Europe operate with just an Economy cabin; however, longer transatlantic services also offer Business Class.

It exists as the official airline of the Irish Rugby Team, helping the players and staff fly across the world to compete in tournaments. The faces of star players have been detailed on the body of some of the aircraft, dubbed the Green Spirit. The regular shamrock feature is stylized within a rugby ball on these special models.