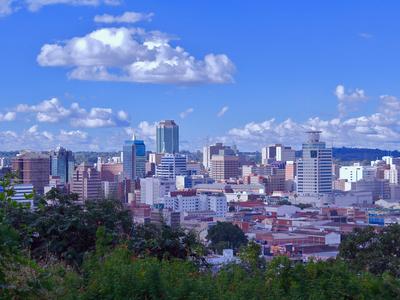 How long is the flight to Zimbabwe?

An average direct flight from Ireland to Zimbabwe takes 38h 26m, covering a distance of 8701 km. The most popular route is Dublin - Harare with an average flight time of 40h 35m.

What is the cheapest flight to Zimbabwe?

What is the most popular destination in Zimbabwe?

Based on KAYAK flight searches, the most popular destination is Harare (100% of total searches to Zimbabwe).

How does KAYAK’s flight Price Forecast tool help me choose the right time to buy?

KAYAK’s flight Price Forecast tool uses historical data to determine whether the price for a given destination and date is likely to change within 7 days, so travellers know whether to wait or book now.

Scores according to KAYAK customer reviews

Pros: "quick entry - but it was not a full flight!"

Pros: "Service manager Alan and crew were lovely, very friendly and felt genuinely happy to help us. I have never been given so much free stuff on a plane before! The snacks and beverage offerings just kept coming. I enjoyed my warm meal. Entertainment offerings were good, and as we were on a newer plane the technology was better than other flights I’ve been on."
Cons: "Seats could have been a bit more comfortable and roomy, but they were decent and I didn’t have too much trouble sleeping."

Pros: "nothing"
Cons: "no communication and a few apologies6"

Pros: "Crew was nice"
Cons: "We were about 45 minutes late taking off so it was stressful for all of us that had a connecting flight."

Cons: "Tough time. British airways wasn’t very helpful. Once our gate was changed no one told us or gave new boarding pass. We did have 7 hours to figure it out. But a clue where to go would have been nice. Missed my connection. Shuttle and hotel was a mess. Got a few hours of sleep outside the airport. Maybe I’ll get to Los Angeles soon."

Cons: "Could you refund me 50.00 as your price included bag price but when directed to book I had to add on bags for a further 50.00 and because of this they wouldn’t let me get on an earlier flight on my return sueevans999@hotmail.com or 07799411994 for response"

Pros: "The customer agents were helpful and just great"
Cons: "That out of 4 agents and the manager one simple agent wasn’t as nice"

Cons: "We were told that those boarding and didn’t need carry on luggage. We went to do so and was told to get in line. When we got in line and up to go on plane, the person (a lady) told us we couldn’t."

Pros: "The staff was nice"
Cons: "You've got to pay for a can of ginger ale now? When did British Airways become a budget airline? What a joke. The plain is an old outfitting with flip down screens and whatnot. It's not like we need these things for shorter fights, but why would anyone pay more to fly a nicer airline if you're treated like you're on Ryan Air?"

Cons: "The only complaint I have is our bags getting lost twice. I’m very understanding that these things happen. But for it to happen twice seems like people might be careless to the problem."

Pros: "The flight attendants were great, helpful and polite. The food was delicious and there was planty leg room. A great airline to fly with and I'd highly recommend them."
Cons: "Nothing, all was great."

Cons: "Not the best airplane food I had, luckily I packed some snacks before leaving Düsseldorf"

Cons: "The change of seats with the motove of keeping balance on the plane"

Pros: "This was a BA codeshare but operated by AerLingus,supposedly a 4* airline."
Cons: "So called 4*"

Pros: "All staff were very helpful and polite"
Cons: "This flight was delayed. When it came to boarding my husband who needs special assistance was first taken to board first but then had to be brought back as refuelling was not done and was then last on board. When we arrived at Heathrow his special assistance was not there and we had to wait for about 10/15 minutes. It is stressful traveling with someone who needs help and even worse when there are delays. We were advised that we could leave the aircraft which we did but we were left waiting in an area without any toilets which is a problem for him"

Pros: "Prop plane but on time with professional staff"

Pros: "Attendance were friendly and helpful and courteous. The plane was clean and we arrived ahead of schedule."

Cons: "We were loaded onto a shuttle bus and then stood there (some sat, I could only stand...) for 10+ minutes until the last passenger arrived. Not sure what the airline could do differently there unless it's run a "late person shuttle," and from other passengers' remarks, this was unusual for this transfer."

Pros: "Generally I like the staff at BA and they are mostly on time"

Pros: "Clean."
Cons: "No complimentary drink or snack, how come?"

Cons: "We are really upset that Aer Lingus and/or Bitish Airways lost our baggeage! All our clothes, toiletries, medicine, and other personal belongings are MIA and we want these two airlines to work together and expedite finding and tertuning our luggage."

Pros: "My screen worked and there was a good selection of movies. I also had a window seat which was great. Any seat except the middle, is always great."
Cons: "No vegetarian options."

Pros: "Nothing"
Cons: "British Airways carrier American Airlines was not clearly notified on tickets/boarding passes/itineraries nor was there any communication between the carriers, so when I checked into British Airways I got no help expediting my check in at American. It was confusing and no one was helpful and instead flip. At American every interaction, whether about connecting flight boarding passes, my five and half hour delay or seating left me feeling unimportant and disrespected. I will never use either airline again nor Kayak"

Cons: "Rude at check in. Late taking off."

Pros: "Connection desk and gate attendance were the only people who tried to help fix the mistakes made by the people in madrid. Global access allowed to quicken our time spent going home after the mets that was our flight home."
Cons: "the attendant at the connection desk did not understand why we had not been given boarding passes or allowed to check in to our flights in madrid. the gate attendants did not understand that even though we were numbers 72 and 73 person processed we were not allowed to check in, receive boarding passes or allowed to sit next to my sister who's reservation was connected to mine"

Pros: "That you could watch movies and shows from the headrest, very helpful to pass the time. They fed us a lot (very salty) and were very nice."
Cons: "I was in the back in the cheap seats (row 50) with a friend, we are both small to regular size and the guy seated in the aisle seat was very small and it was still difficult to get up and around each other to use the restroom. Oh well I paid $462 for round trip and arrived safely, that's what matters most."

Pros: "Not much"
Cons: "1. BA said I couldn't get a seat before 24 hrs before. Then when I tried to get a seat assignment I was told (by email) to contact Aer Lingus. Aer Lingus said that I should have called before 24 hrs before, and that seats were now in control of the gate (this still 22 hrs before flight time). Total lack of coordination. 2. At check-in I was first told that my bag was too big for carry-on, although BA had accepted it. I shrunk it down. Then I was told it weighed too much at 15 kg. When I asked why BA accepted the weight I was told BA's weight limit was different. 3. Net net, if BA is "arranging" the flight through a code-share it should have responsibility for insuring I am treated like a BA customer. Aer Lingus' customer treatment leads much to be desired."

Pros: "swift boarding allowed for an earlier departure and arrival 30min ahead of scheduled time"
Cons: "I waited 30min at the priority check in queue while being first in line this whole time. There was only one counter open for normal check in and one for priority when I arrived and after 20min waiting, the priority counter closed completely and there was just one counter open remaining, with just 10-15min before the check in closed. We had to wait another 10min to be able to check in our luggage! On arrival, luggage took 45min to just start delivering, completely wiping out the 30min arrival ahead of schedule."

Cons: "The sign said it would board by rows but they did general call and it was ridiculous on a flight this large. Nothing"

Cons: "This was a connecting flight for us and was delayed causing us to miss our flight home from London to Los Angeles. There were no flights back to Los Angeles until the following morning (18 hours later). We had to stay in a hotel near the airport in the meantime. My boyfriend and I were forced to miss work an additional day causing stress and inconvenience to our lives."

Cons: "Did not like that I thought it was a BA flight but was really a EI flight , which means I had to get a boarding pass but I was sure was on BA and almost went to there booking counter to get boarding pass."

Cons: "Terrible food, no option available online to order special meals, the restrooms were filthy and not looked after. We are never flying either British Airways or Aer Lingus in future. It was a big mistake !"

Masks required on board, masks provided on flights to Zimbabwe

Middle seats unavailable to book on flights to Zimbabwe

Testing for antibodies, testing for symptoms for flights to Zimbabwe