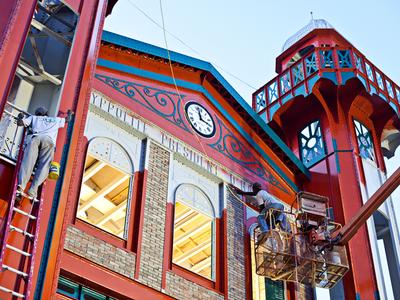 How long is the flight to Haiti?

An average direct flight from Ireland to Haiti takes 32h 09m, covering a distance of 6780 km. The most popular route is Dublin - Port Au Prince with an average flight time of 32h 09m.

What is the cheapest flight to Haiti?

What is the most popular destination in Haiti?

Based on KAYAK flight searches, the most popular destination is Port Au Prince (100% of total searches to Haiti).

How does KAYAK’s flight Price Forecast tool help me choose the right time to buy?

KAYAK’s flight Price Forecast tool uses historical data to determine whether the price for a given destination and date is likely to change within 7 days, so travellers know whether to wait or book now.

Scores according to KAYAK customer reviews

Pros: "The seating, the comfort, the entertainment, the complimentary food, the drinks. Everything was great with American Airlines."
Cons: "Nothing."

Cons: "The sound didn't work on my entire row for the in flight entertainment; it made for a long flight."

Cons: "Flight was delayed. Sometimes it’s not airlines fault. Not 100% clear on who was at fault. Toilets apparently water wasn’t working on aircraft. Upon landing at BNA a baggage guy attempted to rush us because flight was late and needed to get back to ORD. With no consideration for over 2hrs waiting"

Pros: "I have never experienced as smooth a landing on both legs of the trip. I’ve never flown American before and in comparison to other air lines I think they must have the most experienced pilots. Everything else was equal in quality to other US airlines I’ve flown, the usual stuff on long distance flights - but I felt the staff were a notch above the others as regards friendliness and helpfulness. I had a very smooth trip, no delays or problems. I will fly with them again."
Cons: "Bathroom on the plane could have used a good cleaning."

Cons: "Not sure why it was a Finn-Air flight when it was an AA plane and crew?"

Pros: "Trip duration, coordination of the crew"
Cons: "The food. They need to bring back complete meal for the customer. Enough with chips and soda."

Pros: "Seats were reasonably comfortable"
Cons: "My console did not work for the entire flight, including the overhead light and hellp/call button. The screen in front of my seat displayed error messages for the entire flight of 8 hours, from the time I got into my seat until after landing. I asked the crew about it before take off. Nothing they did fixed it, not could the screen be turned off completely to avoid scrolling messages for 8+hours. During the flight I was told it couldn't be fixed until after landing. In that case why wasn't it taken care of before my flight ever started? Anyone inspecting the plane properly in between the previous flight and mine would have and should have seen the same error messages on the screen I saw, and resolved it then. ''Hot'' food in the main meal was salty and lukewarm. Also irritating that flights for 3 people booked 5 months ahead of take off with no option for us to choose seats should end up with 3 separate seats at opposite ends of the plane. Should automatically assign seats together for people booking that far out, on a first come first serve basis or allow seat assignment at time of booking by the customer. This flight was about the typical experience most passengers have come to expect from companies who have too much power and really don't care about the customers they are supposed to serve. This is not a reflection of the actual crew on the flight itself, they were average, not bad, but not great."

Pros: "Smooth boarding, the crew was really nice (and it didn't hurt that they were generous with the wine)."

Pros: "Staff was great. choice of food/beverages."
Cons: "The people in front of us were having a party all night during the quiet period."

Pros: "Movies and did not feel squished. Never had so much food service on a flight before."
Cons: "Nothing negative to say."

Pros: "New plane, all kinds of entertainment choices including new movies, great flight crew, smooth flight."
Cons: "American check in software was down when we got to the airport. Created a very large line. Did not delay boarding, even though passengers still had to go through customs before reaching the departure gates. Had a bit of jog to make sure I was able to get on the plane."

Cons: "The Video on Demand service for movies, TV, and Music would skip every 10 to 20 seconds, jumping forward about 2 or 3 seconds at a time...making videos unwatchable. This was a problem for my seat, the two in front of me, and apparently many other seats on the flight."

Pros: "We appreciated that American Airlines found us two seats together for the long Dublin-Chicago leg of our journey."

Pros: "Food was good as were the movies & seat"
Cons: "Gate supervisor (male) in Dublin was unhelpful. He announced theee times that the US Customes pre-clearance would close shortly. This announcement was in the gate area where everyone had already had to have cleared the Preclearance US Customs. Then when he announced boarding for priority and Business class he "pointedly" told the zones 1 thru 4 to all begin boarding at once (w/ one agent while three agents stood behind chatting) and to only use the one Priority lane. Thirty people all gathered for the very slow process. The Gate Supervisor the says he would start boarding Zones 5 and 6 in the other lane. Zones 5 & 6 all boarded while I (zone 1 passenger) and five others were still in que boarding thru the priority lane. Poor leadership. The Business Class flight attendant while serving snack, spilled my hot tea on my shirt, trousers and iPad. She was very apologetic and said that she wished she had not filled the cup so full. The tea "happens" and was no big deal. The Gate agent on the microphone in Dublin was having a bad morning and transferred his unhappyness to me, which I did not bargain for on the 27th."

Pros: "Nothing it did not exist"
Cons: "You cancelled my flight without telling me"

Cons: "At least one of the entertainment systems wasn't working right. Otherwise everything was okay."

Pros: "Friendly crew made a long international flight with a 14 month old as pleasant as possible."

Pros: "I wish I could remember the names of our flight attendants- but they were wonderful and really took time to get to know passengers! They were so friendly and went above and beyond in any of our requests. Loved them!"
Cons: "It would have been nice to have individual screens for such a long flight, but I wouldn't say that's a complaint. The flight was fine."

Pros: "Everything! Leg room"
Cons: "The touch screen for entertainment was maddening!"

Pros: "loved the movie selection and how nice the crew was"
Cons: "The fact that my party was seated in different areas of the plane."

Pros: "ON TIME!!!!! Nice folks, smooth and safe."
Cons: "Got through the extensive security lines to USA one hour before scheduled departure and looked at the screen which said 'final boarding' which was not true and made us panic a bit, running for the gate. It did board and leave on time but not an hour early. This flight was night and day different than our ORD to Dublin flight of 5.12.17 which was 5 hours delayed and do stressful."

Cons: "Chairs were a bit tight"

Pros: "Nice crew. Chairs were comfortable."
Cons: "Not enough movies! No individual screens. Plans had dirt stuck all along the air vents"

Cons: "Lousy food. Cramped seats, try to make you pay extra for seats to sit together,"

Pros: "Individual TV. Price."
Cons: "Food was terrible. Flight attendants were equally bad. Only one attendant was helpful and accommodating. They act like they don't like being there. Need to take lessons from Emirites Airlines. Or Swiss Air. Or even Ethiopian Airlines. Just smile. Be genuinely nice. This bunch were grumpy, conceded, and unfriendy."

Pros: "Getting there safe and sound"
Cons: "We didn't fly FinAir, it was American Airlines"

Pros: "Got an economy extra seat without upgrading, had a variety of snacks and service extras which were nice"
Cons: "Was never asked for dietary restrictions so no vegetarian meals were available, pretty old aircraft to be flying that route, no seat back entertainment"

Cons: "The touch-screen entertainment system was not very responsive. It was difficult to get the screen to recognize your selection."

Cons: "Felt like an old domestic flight. No Wifi and screens in the center that are hard to see from the window seats."

Pros: "Individual screens worked well, food was good."
Cons: "Flight attendants with carts bumped my boyfriend's shoulder repeatedly, nearly every time they went by, without ever apologizing. They were also really rude when we asked for additional beverages. I travel very frequently, and I was shockedz"

Cons: "No entertainment systems Chairs were old and uncomfortable"

Pros: "The captain and the flight attendants were very communicative and kept in touch with the cabin at regular intervals but not intrusive."
Cons: "There were 2 meal choices., one was chicken and one vegetarian curry/rice dish. Clearly the chicken would be the most sought after meal and the flight attendant even suggested the possibility that everyone would not get their first choice, and ofcourse they didn't. We had a group of 10 traveling and by the time some of,our group was served the chicken was gone. Our daughter was 7 months pregnant and was one who didn't get a chicken meal. I don't understand why the airline would not provide an adequate amount of meals that would apply to the masses. Only a few vegetarian to fill in for specific diets would be expected. We all felt this was poor planning on the part of the airline catering company.."

Pros: "Upon sitting down, I was able to fall asleep almost instantly. The helpful stewardesses were constantly aware of my needs."
Cons: "Check-in desk seemed confused and unorganized. Two very friendly ladies were helping out but were on different wavelengths."

Pros: "The food was very good! Chicken and mashed potatoes with broccoli was very tasty! A very small salad, a seeded bun, cheese and crackers and apple crumble rounded out the meal. Later pretzels and the grilled cheese and blueberry pastry. Pillow and blanket nice."
Cons: "Movies hard to hear with provided ear buds. I tried three and gave up."

Masks required on board, masks provided on flights to Haiti

Middle seats unavailable to book on flights to Haiti

Testing for antibodies, testing for symptoms for flights to Haiti